2019 kicked off with a bang on January first, as our troupe of guests roused themselves from their slumber, squinted into the morning sunlight to the sight of Max’s Right peeling along the reef yet again with not anther soul around. What a way to bring in the new year eh?

Let’s re-acquaint ourselves with the smart cookies who made TIL their home for the festive season.

James Morgan. London, England. Noted movie director. Came a close second to wife Sara for amount of chocolate cupcakes consumed in one trip. Possibly the unluckiest UNO player ever to grace the Telos, picked up more cards than he put down.

Sara Morgan. Academic. Bounced hard into 2019 on her 21 day trip with husband James. Did her best to give James a heart attack with the amount of times she went over the falls. Never once backed down and would send it on the next set wave each time. Holds the record for amount of chocolate cupcakes consumed in one trip.

James Bergmuller. Car dealer/ pro race car driver, Geelong Victoria. A man who loves crashing into barriers on Mt Panorama and fanging it down the straights. Took that love of speed and applied it to Max’s Right and Schoolyards. By day four his shoulders were cactus.

John, Ferry and Erica Dalkowski. 15-year indo expats living in Bali. First time to the Telo region and loving it. John had a few bombs out the front and was always keen to check new places.

Surfwise, lots of sessions out the front for a decent four-day swell. We had a few days at the Left and Schoolyards, then finally the E.R as the swell curled up and died.

But hold the phone everyone: the forecasts are looking promising for the rest of January with a couple of back-to-back swells inbound. Strike mission anyone? 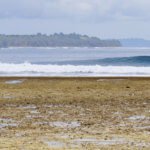 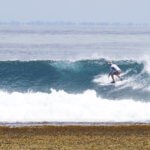 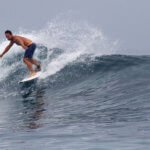 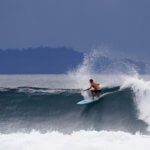 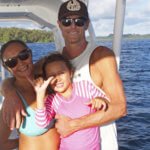 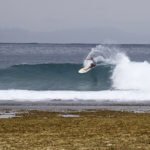 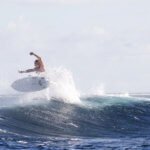 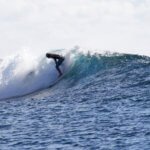