Fast forward exactly 79 days and that very same plane descends out of the clouds and lands at the Telo airstrip, taxis to the modest terminal and comes to a halt. Out steps Olivier, crosses the tarmac, greets the crew, and basically retraces his steps back to Pinnacles.

Turns out 12 weeks was as long as Olivier could last away from the waves and the good times here at Pinnacles.

Sometimes you simply gotta be where ya gotta be.

Olivier Jardon El-Hiny. Spreads his time between Zurich and France – and, it would seem, Pinnacles…
On this strike mission return to PNT he managed to step down from his longboard to a sleek 7ft beauty he named in honour of one of his favourite waves on the planet – The Bubble.

Keith & Kaden Awad. Maui.
A ripper father and son team and it was hard to tell who was more psyched on the deal – goofy Keith or his natural-footed son Kaden. Nothing’s more special than surfing with your flesh and blood in perfect waves. 10-year old Kaden ripped for his age and took a shine – as all natural footers do – to The Bubble.

Craig Awad. Manila.
Craig co-owns a Telecom company in the Philippines with brother Keith. Unfortunately Craig got hit by a car on his bike prior to his arrival and injured his neck which put him out of the water. Still, there are worse places to recover from injury.

Mark and Brandon Mitchell. North Carolina.
An annual tradition for these two champions – another goofy dad/natural son duo – is a double banger Indo trip. This year they’re doing 10 days here then 10 days in Sumba. Super cruiser Mark shapes beautiful, sleek boards for himself and highly refined performers for son Brandon. Brandon surfs at an elite level and got many barrels at GT’s and bombs at our big un-named right.

So… a good time was had by all in this small, family-focused guest group. Excellent conditions and an abundance of swell resulted in several satisfied, surfed-out souls climbing aboard the charter flight to head home. Let’s see how long Oliver can last being away from Pinnacles this time! 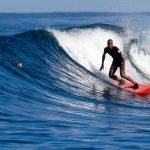 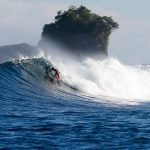 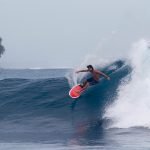 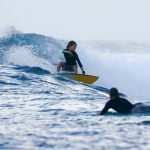 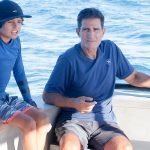 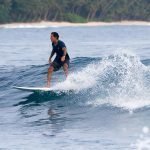 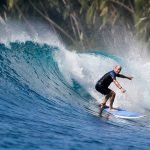 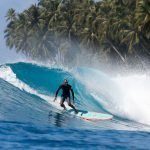 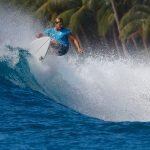