We are getting well into the surf season here in the Telos, and it’s easy to tell with the size, consistency and quality of the waves that have been plaguing us over the past week or so. With pulses arriving every few days, it is hard to wipe the smiles from the guys’ faces. A few of our guests have stayed on and are doing back to back trips here at Telo Island Lodge, and I think they have picked a good time to do it. Last trip, we saw consistent head height waves at almost every session, and this trip is looking like it’s not going to be too much different.

As the new guests arrived at the lodge on Wednesday, they saw the rest of us surfing out the front, alone, with glassy waves around the 3-4 foot mark and the occasional bigger set coming through. Rolling into the lodge and seeing that definitely would have increased the excitement levels and made them super keen to hit the water after 30+ hours of travelling, and this first taste of Telo has just barely set the standard for the rest of the week. Max’s Left has been on fire the last couple of days with some really fun waves rolling through on all tides. We should see an increase in swell over the next couple of days, with it backing off slightly and then followed up by an even larger swell the middle of next week! The surf has been great fun, but I think it is only going to get better. Let’s just say that its a nice time to be in Telos.

Me on a nice little runner out the front.

Mark setting up at Max’s Left.

Corey has his eyes on a section here at The Left.

John carving off the lip.

Lenny with a beautiful wall to do as he pleases.

Big Mark on a real glassy one.

Almost tucking under the lip here at Max’s Left.

Ben releasing the fins on the inside section.

Moffo showing everyone how to put an Al Byrne channel bottom to work.

Moff dropping into a good looking wave at The Left.

Simmo stalling for the barrell.

And Simmo again, on an absolute cracker 100m from his bed. 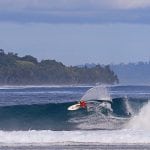