Solid trip this one, with the exception of one session at three-foot E.R, the swell didn’t dip below four feet the whole time… The boys even had to take a breather on day seven due to total surf exhaustion (and if it wasn’t for morning yoga some of the crew’s arms might have fallen off…). Anyhow let’s meet this crew of lucky, lucky bastards.

Kruger “Kim” Geldenhuys. Film director from Capetown, South Africa. Surfed long and hard, charged his 5.00am yoga, insisted his buddies down a tequila shot each arvo on arrival back at the lodge, designated DJ for the trip, legend.

Richard Hart. Few people can claim to having surfed Max’s Left back in the 90s but Rich did. He loved it then and loves it now. His only regret from back then is not knowing about Max’s Right around the corner … which is now his favourite Telo wave. Rich discovered yoga on this trip and is now a believer…

Johannes “Jan” Jacobs. Ringleader of the Saffir Posse. Jan’s lived in NY for the past two decades but is still tight with his S.A buddies. Jan was the barrel master at GTs, wrestling the foam ball and almost always coming out the winner!

Dr Brendan Doweris. The good Doc (a hip and knee surgeon from Cape Town) has only been surfing for half a year. He took it up after seeing his kids have too much fun. Brendan really loved the Left and spent hours each day sending it down the line! Even when exhausted, he’d paddle back out time and time again until the last light each day.

Luke Ryan. I.T fella out of Wollongong, NSW. Luke (and buddy Matt) booked this trip at the last minutes and it turned out to be a very good impulse. Luke might have logged the most hours in the water and distinguished himself by never pulling back at GTs, even after copping some solid floggings.

Matt Szwedzicki. Luke’s mate. A super cruisy fella. Like Luke he charged GTs – despite getting worked – and was rewarded for his efforts. Surfed solid Max’s Right and Left when most were too tired. Managed to give himself a black eye on the first surf out at Max’s Right, which seemed a bit unfair for this most agreeable gent.

As reported, the swell was sensational for the whole trip pretty much, and the winds were custom-made for us: south-easterlies in the morning (offshore at The Left), swinging west in the arvo (offshore out front at The Right).

Our seven hour GTs session would have been the highlight of the trip, no-one around, just us taking turns. The trip back to base in the arvo saw everyone grinning from ear to ear.

So high were spirits that one evening, after much-loved SuperGuide™ Dingo had sensibly snuck away to crash (SuperGuides do need their sleep), the guests took to chanting “Dingo Dingo Dingo”, for quite some time outside his room…

As we file this report, the biggest south swell of the year is hitting. Out the front is currently already six-foot plus and building.

June in the Telos eh? It’s a bloody beautiful thing. 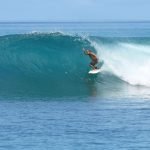 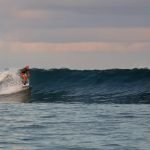 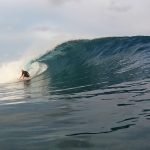 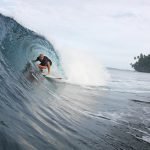 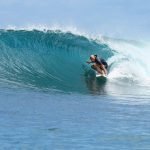 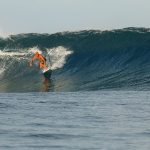 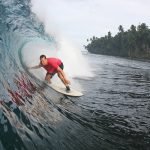 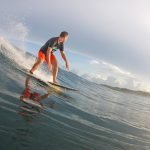 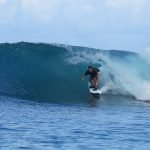 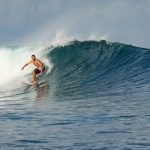 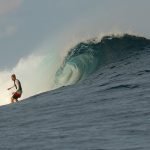 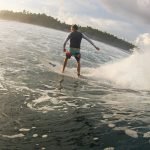 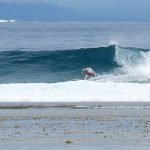 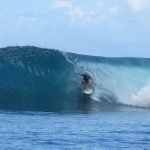