The WNW wind is a friend to many on the East Coast of Australia, but it’s a bastard in the Telos, and unfortunately this bastard, along with some unseasonally crapulous weather made its presence felt for our group of champion guests.

This trip was convened by deadset legend master shaper Murray Bourton, who shaped each guest on this trip a custom shooter as part of Pegasus Lodges’ “Shape Escape” program. The idea is to spend ten days surfing your new board with your shaper, and use real-time feedback to hone in on a board that’s even more magical for next time.

How’s that for an excuse for a surf trip! Anyway, let’s meet the boys.

Murray. Legendary shaper for decades who’s done more Indo trips than he can remember. Murray was smashing two surfs a day, and when he wasn’t screaming down the line with his quad carbon fins he was screaming Z’s on the lounge next to the bar, dreaming for the wind to swing for the Left he’d heard so much about.

Ralph. An old Lennox legend who won’t let time and age stop him, frothed like a grom every morning. His ‘let’s go’ attitude was infectious in and out of the surf. Never missed a session and was always trying for 2-3 times a day.

Craig. A tattoo artist originally from the Goldy, now residing in Cairns. Living away from the surf hasn’t killed his style or the energy he puts into each turn. Skull Island and a Telo Tour were a highlight for Craig. He also found a giant 2m Komodo just next door to the lodge. Believe it or not.

Lane. Top bloke from South Oz, one of Murray’s shapers back in the day. Unfortunately Lane tore a tendon in his shoulder on day two but did an awesome job keeping spirits high and everyone entertained for the whole trip. Always up for a chat and a laugh while watching the boys scream down the line.

Chris from Nth NSW. Legend fella also hurt his shoulder on the first day. He let it rest and finally got back out there to enjoy Max’s Left and Pinnacles as they came good as well.

Sanity was preserved by lots of good humour and good old Max’s Right, our house break had a knack of turning conditions to our advantage, and for the first five days all we did was surf out the front at a decent three-to-five feet with variable conditions.

The closing days of the trip saw the Telos return to form, the rain and clouds pissed off, raising spirits and opening up a few more options. And on the last day Murray and his troop of salty legends finally got to surf the Left, after holding out for nine days.

Despite the challenges of the weather, all got to fine-tune their Bourton Shapes quivers, and the inaugural Telo Island Lodge Shape Escape was officially declared a success. 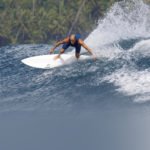 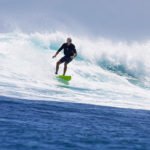 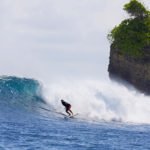 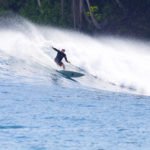 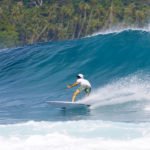 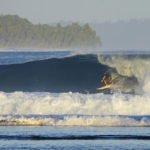 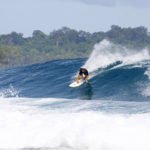 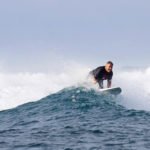 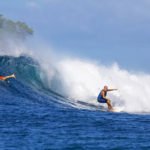 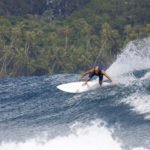 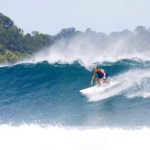 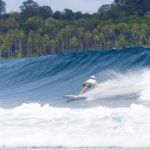 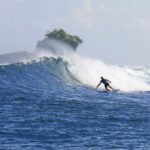