May just might be the best month of the surfer’s year – at least in the southern hemisphere: Autumn has finally arrived in Australia and all coasts start to fire, Jeffreys Bay gets its first serious swell, and Indo – well, those same Southern Ocean weather systems that swipe South Africa and Oz with swell energise the Indian Ocean no end.

And of course, out here in a special corner of the archipelago, lies Pinnacles North Telo, and five sensational guests who’ve called it home for the last week and a half. Let’s meet ‘em.

Ian Richards: Sydney.
Richo was here last year and has been counting down the days to his return trip. An absolute frother fond of two surfs a day, a carving cuttie and a lunchtime Binnie in the pool, any trip with Richo on board is a fun affair!

Brett Menzies: Sydney.
It’s been two years since Bretty – a good mate of Richo – was out this way, and though he expressed his joy at being reunited at last with Max’s Left, it appeared he was quite angry with the wave, repeatedly belting the daylights out of it.

Liam Shiells: Sydney, by way of, och, Scotland!
Scotty, as he’s known, is a noted bridge engineer but surfing is clearly his first love. First in, last out, pretty much every session, without fail.

Seiichiro and Maki Fujiwara: Tokyo.
A delightful low-key couple who came with the express purpose of charging whatever they could find. Seiichiro was the silent assassin, Maki was an always-smiling positive presence. One of our favourite husband and wife surf teams for sure.

Overall, we had light winds for the whole trip with a constant medium size swell, with Max’s Left, The Bubble and perfect Kindies providing most of the action. The standout session would be Max`s Left, two days in a row at three-to-four foot with very few, if any, other humans around. 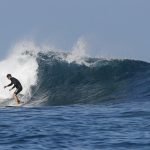 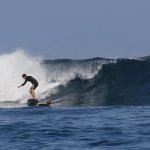 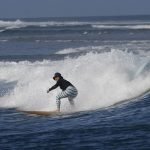 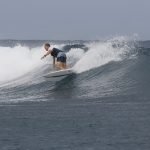 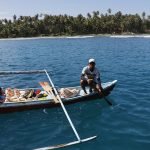 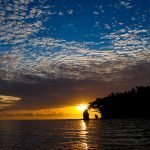 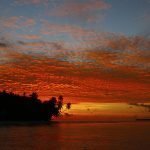 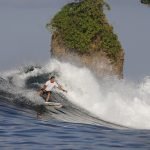 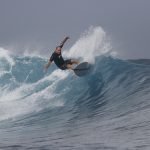 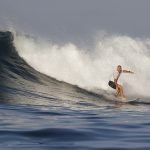 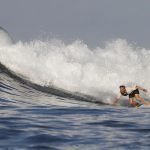 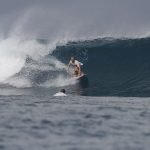