Day 3: Excursion Across the Lagoon

The pre-trip forecast showed Day 3 as the smallest day of surf. Since the next morning would bring a bump in swell for the remainder of the trip, we had planned to spend the day exploring the lagoon and walking the legendary fishing flats of Irapa. Still, we were pleasantly surprised to see a few fun ones still coming through at Fanning Left.

After a quick post-surf breakfast, we set out to traverse the vast lagoon with two boats and two guides. It was a meandering cruise around reefs and shallow sand bars, through some of the brightest, most crystalline blue water we’ve ever seen. We trolled as we went, so our progress was constantly slowed by the massive GTs smashing our lures and inevitably escaping to freedom through a combination of our undersized gear and the hundreds of coral heads that fill the lagoon. As we pressed on towards the far end of the atoll, a beautiful six-foot tiger shark cruised the opposite direction, barely noticing us as it passed.

Reaching Irapa, a vast sand flat full of fish, we broke into two groups, each with a guide to walk the shallow water in search of bonefish. This outing was more of a fish-viewing safari than a hard-core fishing trip, but it was still fun to spot and stalk the fish in this sublime setting. Triggerfish, GTs, golden and bluefin trevally were the catch of the day, all released back into the deep blue. After a couple of hours, we made our way to the sandy shore at the edge of the dense palm jungle. Despite the solitude, we quickly discovered that we were not alone – the sugary sand was teeming with giant land crabs. We caught a few (OK, maybe more than a few), and our guides built a small fire and roasted them right on the beach. We feasted on the crabs and washed them down with fresh coconut water. After the amazing and spontaneous lunch, we threw a few more lines into the channel that was swirling with huge schools of colorful fish. Parrotfish and giant trevally were everywhere. After a long and satisfying day of fishing and crab hunting, we got back on our boats for a late afternoon cruise to the lodge.

Back at the lodge, we relaxed for a while and then gathered for another crab cook, accompanied by delicious local breadfruit and the octopus we had also caught that morning.  As the sun sank, we sat together, sharing a duty-free bottle of whiskey and telling stories. Thoroughly satisfied and exhausted by the day’s adventure, we fell asleep easily but not without noticing the growing sound of waves breaking on the reef a hundred yards away. The new swell was arriving.

Oh. Sorry, didn’t see you there! Friendly competition on the Fanning Left.

Crossing the Fanning Lagoon. A myriad shades of blue as far as the eye can see. Fanning Island, Pegasus Lodges.

Putting out a line while we made our day across the Fanning Lagoon. Fanning Island, Pegasus Lodges. 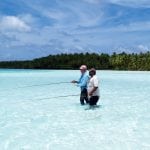